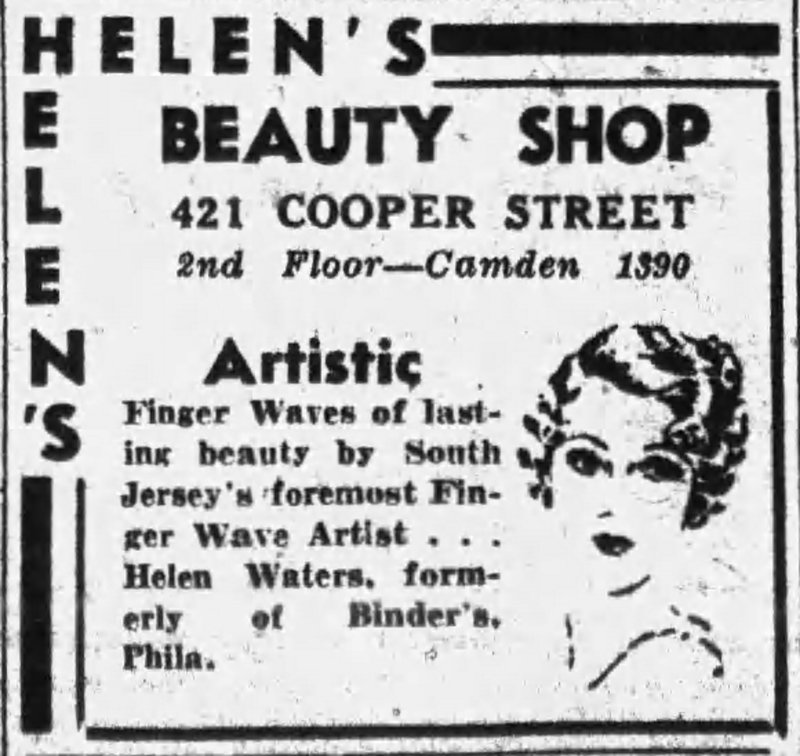 Helen Waters, a widow, supported her family by operating a beauty salon on the second floor of 421 Cooper Street from the 1930s to at least 1950.

In 1933, Helen Waters opened a beauty shop on the second floor of 421 Cooper Street. She vigorously promoted her business with display advertising and flattering promotional articles in the Camden newspapers, encouraging the women of Camden to come to her for the latest in hairstyling and cosmetics.

By the time Helen opened her shop at 421 Cooper, she had been widowed and her work as a beautician supported two daughters. The 1930 Census found her at age 30 living at the Harding Villa Apartments on Federal Street while her daughters Patricia and Dorothy, then aged 9 and 10, lived with her parents Daniel and Lida Chester elsewhere in Camden. Helen, who had an eighth-grade education, worked as a beautician for Binder's Beauty Shop in Philadelphia before opening her own establishment at 421 Cooper Street, where she and her daughters also came to live. In 1938, Waters added cosmetics and facials to her business. Her daughters both graduated from high school, including at least one year at Mount St. Mary's Academy run by the Sisters of Mercy in Plainfield, New Jersey. In 1940, living with their mother at 421 Cooper, Dorothy worked as a typist and Patricia as a telephone operator. Patricia actively promoted a women's basketball league in Camden for former high school players.

The 421 Cooper Street building, originally a Greek Revival row house, had been renovated into an office building with Mission Revival embellishments. Other businesses and organizations, including the Camden County Real Estate Board and the Camden County Democratic Party, had offices in the building while Helen operated the shop and lived upstairs. In 1945, after both of her daughters had married, Helen bought the building but retained ownership only until 1947. When she put 421 Cooper Street up for sale, it offered an office suite on the first floor, additional office space on the second floor, "plus three nicely planned apartments with modern tile baths." Helen continued to operate her beauty salon in the building until at least 1950, but after its sale she moved behind it to 426 Lawrence Street.