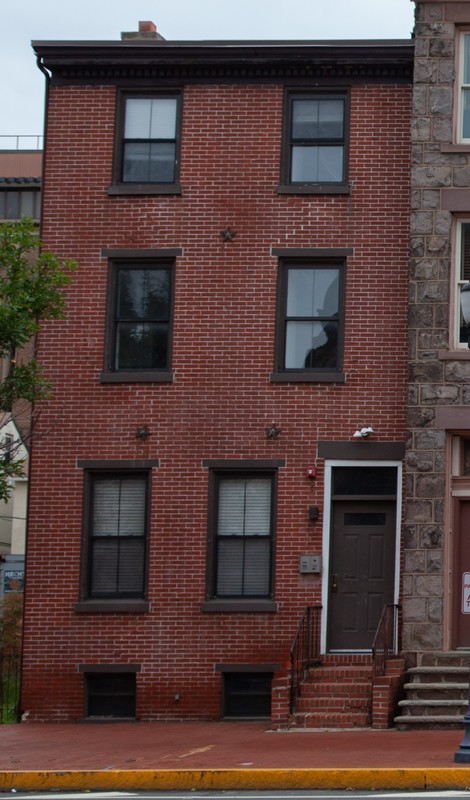 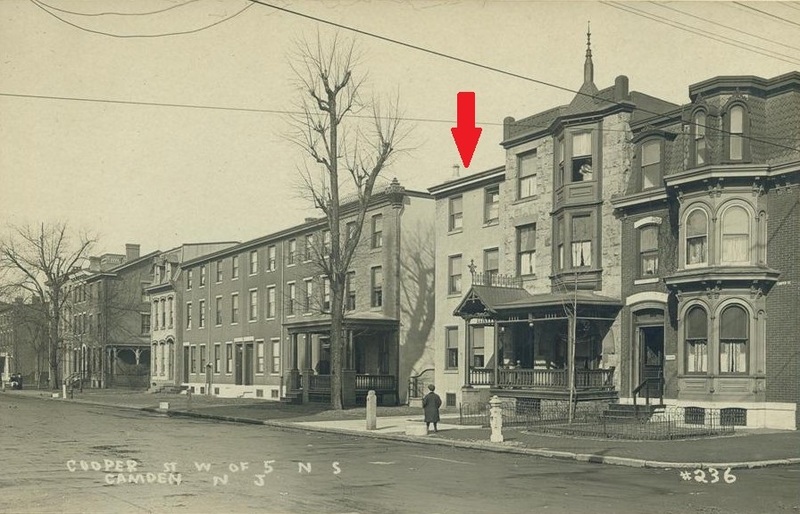 425 Cooper Street is a contributing structure of the Cooper Street Historic District, listed on the New Jersey and National Registers of Historic Places. Together with the row 415-21 Cooper Street, 425 represents a significant transition in the evolution of Camden during the 1840s as homes were built for the first time on land formerly owned by the Cooper family on the north side of the street. The nomination of the Cooper Street Historic District for the National Register identifies significance in part through architecture and transitions of use: "The buildings within the district include Camden's best remaining examples of Federal houses and its most intact examples of nineteenth-century houses as well as important office and bank buildings of more recent vintage. These buildings demonstrate the street's change from residential and professional to commercial." The home at 425 Cooper Street represents these transitions through its use for dental and medical practices from the 1880s through the 1970s. Furthermore, the house was built for an early public official of Camden who also developed houses at the back of the property on Lawrence Street. This first owner, Isaac Porter, also served as treasurer of the West Jersey Ferry Company, reflecting the historic significance of Camden as a point of connection between South Jersey and Philadelphia. In 2020, 425 Cooper Street was privately owned and divided into rental apartments.

Three long-term owners of 425 Cooper Street reflect patterns of transition across the nineteenth and twentieth centures.

In 1846, just two years after Camden became the governmental seat for newly-designated Camden County, Isaac Porter bought the land where 425 Cooper Street stands from a member of the region's most prominent founding family, Alexander Cooper. His purchase and subsequent building of a three-story brick row house was part of the first wave of home construction on the north side of Cooper Street. Porter (1807-1867) was in many ways a town builder and booster for Camden during the 1840s and 1850s as he developed his property, served in public office, and oversaw financial matters for the West Jersey Ferry Company between Camden and Philadelphia.

The Porter family owned 425 Cooper Street for more than three decades. The U.S. Census in 1850 documents the Porter family during their early years at this address: Isaac, age 46; his wife, Esther (Ackley), age 40; and five children, a daughter and four sons ranging in age from 5 to 18. Isaac Porter served as Camden County Surrogate, an office responsible for recording wills and other matters related to settling estates.

In 1849 Porter also had been appointed treasurer of the newly incorporated West Jersey Ferry Company. One of Camden's important connections to Philadelphia, this ferry had been operating since 1800 under management of the family and descendants of Abraham Browning, and thus was better known to local residents as "the Browning ferry." It had a prime location, running between Market Street in Camden and Market Street in Philadelphia. As the ferry took on its new status as a corporation, its presence on the Camden waterfront grew with a wharf that further extended filled land into the Delaware River, a ferry house, and a new West Jersey Hotel.

Porter, meanwhile, developed his Cooper Street property by building two smaller houses at the rear of his lot, on Lawrence Street. The houses, numbered 432 and 434, were completed by 1855, when they served as models for an additional six two-story row houses contracted for construction by Benjamin H. Browning (a member of the ferry-operating family although not a participant in that venture). These rental properties attracted skilled tradesmen. The earliest that can be documented are in Camden city directories of the 1860s: at 434 Lawrence Street in 1865, a cabinet maker, Alexander Haines; and at 432 Lawrence Street in 1869, a carpenter, William Rotter.

During the 1850s, Porter served twice as city treasurer for Camden (assisted by his oldest son, Joseph A. Porter, who lived down the street at 538 Cooper and later held the same office). By 1860, the Porters' older children had left the home, but the household also had gained two new female residents, likely extended family members (Eleanor Ackley, age 68, and Abigail Cooper, age 32). They also employed a domestic servant, Martha Butler, who was African American. To Census takers, she reported her age as 25, her birthplace as Delaware, and indicated that she had been married within the last year and could not read or write.

A generational transition took place at 425 Cooper Street during the 1860s with the deaths of the senior members of the family: Esther Porter in 1863, followed by both Isaac Porter and Eleanor Ackley in 1867. As customary for the time, funerals for all three took place in the family home. For Isaac Porter, the flags of the ferry boats of the West Jersey Ferry Company flew at half-mast to honor his memory.

Three of the Porters' sons remained at 425 Cooper Street through the 1870s, with the Census of 1870 recognizing the oldest of the three, 31-year-old Israel E. Porter, a store clerk, as head of the household. The family by that date included Israel's wife Ella and their infant son Harry; the other Porter brothers George, a coach maker, and Charles, a store clerk; and one or possibly two servants (in two separate listings for the family in 1870, two different servants were recorded: Margaret Brown, age 30 and described as mulatto, and Gattie Posley, age 20 and African American. This extended family remained until 1880, when they rented the property briefly to an insurance agent and his family. Financial difficulties may have contributed to the ultimate sale of the home, as it went to sheriff's sale in 1881 to satisfy back taxes.

The next long-term family came to 425 Cooper with the street's transition during the 1880s, with the founding of nearby Cooper Hospital. Proximity to the hospital made Cooper Street an idea location for medical professionals who established both home and office in structures that previously served strictly residential purposes. Such was the case for 425 Cooper Street and the Irwin family, who lived and provided health care at this address for more than forty years starting in 1884 (and for several years previous, next door at 427 Cooper).

The owner of record for the Irwin home was Asbury Irwin, a stenographer for the Common Pleas Court in Philadelphia, but the head of the family was his father, a long-time physician, Samuel B. Irwin. The family had roots in the Brandywine region of Delaware and southeastern Pennsylvania, where the previous generation had operated iron furnaces. Samuel and his brother, the Philadelphia surgeon Hayes Agnew Irwin, inherited the iron business but also earned medical degrees at Jefferson Medical College.

The primary medical practice during the Irwins' ownership of 425 Cooper was the dental office of Alphonso Irwin, who was about 25 years old when his brother Asbury bought the home. A recent graduate of the Philadelphia Dental School (which later became part of Temple University), he founded a Camden Free Dental Clinic as well as a private practice that continued until his retirement in the 1920s. While living at 425 Cooper Street (which he purchased from his brother Asbury in 1896), Alphonso married and with his wife, Anna, raised two children. He wrote frequently about dental hygiene, particularly for children, and became a noted authority on dental law.

Alphonso Irwin became a leader in New Jersey dentistry, which for a time made 425 Cooper Street the headquarters for the New Jersey Dental Association. The association's need for a secretary brought into the Irwin household a boarder whose unusual background captured the attention of Camden residents between 1913 and 1915. The Camden Courier-Post reported frequently on the social and professional activities of Winifred de Mercier-Panton, who had been born in Australia but somehow had come to be employed by Irwin as secretary of the New Jersey State Dental Board. When she had a birthday party, when she attended a social event in Philadelphia, and when she met the governor of New Jersey, the Courier-Post noted the details. In November 1914, with the Great War underway in Europe, she announced her engagement to a captain in the British Colonial Force and soon thereafter departed Camden to serve with the Voluntary Aid Attachment of the British Army. In 1915, for circumstances unknown, she was awarded a Royal Red Cross for distinguished service.

Office in Camden, Home Away

The next owner of 425 Cooper Street, osteopathic physician George W. Tapper, lived in the home for about five years during the 1930s. By 1940, however, he and his wife, Dorothy, had a new home in Medford Lakes, Burlington County. Like a number of other medical professionals on Cooper Street during the later decades of the twentieth century, Tapper treated his property as an office/apartment building with residential tenants living in the upper floors. The frequent turnover of apartment dwellers  included Edgar J. Anzola (1937), a Venezuelan who worked in the international division of RCA; Eugene Gravener Jr. (1944), who earned the Air Medal for supplying materials to American and Chinese combat troops in north Burma during World War II; and Rosemary Tully (1958), an Irish woman joined by her new American husband after they married.

George Tapper owned 425 Cooper Street until 1975, the first in a sequence of transfers of ownership to absentee landlords. Starting in 2007 and continuing in 2020, the property was owned by investors from the Bronx, New York, and served as rental apartments.