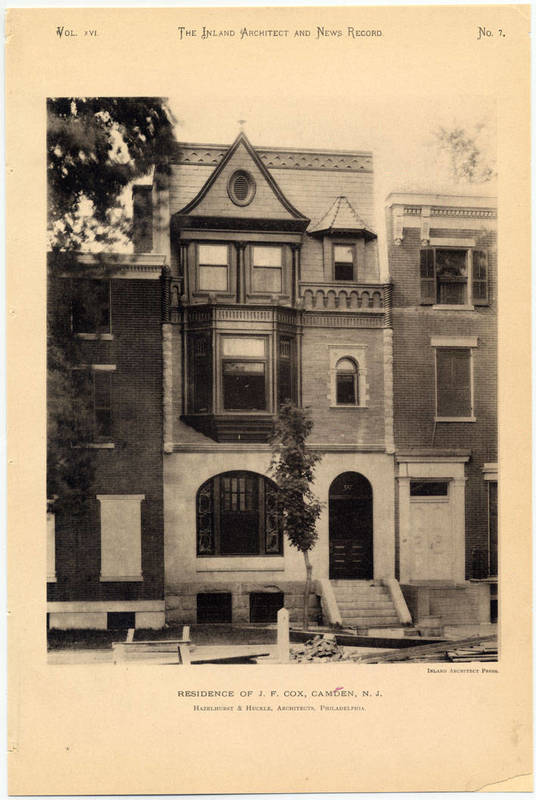 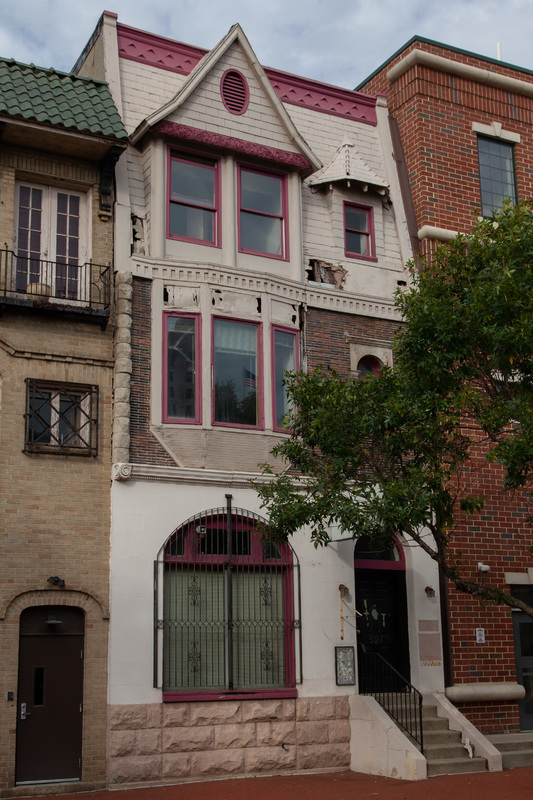 527 Cooper Street is a contributing structure of the Cooper Street Historic District, which is listed on the New Jersey and National Registers of Historic Places. Its designers, Hazlehurst & Huckel of Philadelphia, are named in National Register documentation as among the architects whose work warranted designating the district based on its distinctive architecture. The building also illustrates the district’s significance in representing broad patterns of American history. As stated in the National Register nomination: “The buildings within the district include Camden’s best remaining examples of Federal houses and its most intact examples of nineteenth-century houses as well as important office and bank buildings of more recent vintage. These buildings demonstrate the street’s change from residential and professional to commercial.” During the 1920s, the building housed offices of real estate agents and a builder who played important roles in that transition. The building also has a notable history associated with individuals prominent in industry and government, their families, and domestic workers whose histories reflect patterns of immigration and African American migration.

Queen Anne. Documentation prepared in 1980 by J.P. Graham of the Division of Planning, City of Camden, stated: “Although altered the house preserves an element characteristic to residential construction on Cooper St. in the last decade of the Nineteenth Century. It is also one of the few Queen Anne buildings remaining in the Central Business District of Camden.”

In 1889, an officer of the Anderson Preserving Company in Camden commissioned the Queen Anne-style home at 527 Cooper Street. Like other new homes on Cooper Street during the 1880s and 1890s, it likely replaced an earlier, less elaborate brick row house. The construction of the new home occurred as Camden grew in size and stature, and as Cooper Street became an increasingly fashionable address. The character of the street changed in the early 1880s when curbs were moved toward the center of the street by twelve feet on each side, which gave homeowners space to create a boulevard of homes fronted by porches, front yards, and gardens.

Abraham Anderson, a partner with the founder of Campbell’s Soup before forming his own firm, lived at 232 Cooper when he bought the 527 Cooper Street property up the street in 1885. Four years later, he sold 527 to his daughter, Ella A. Cox, who with her husband, John, newborn daughter Martha, and domestic servants became the first residents of a new house built on the lot in 1889.

To design the new home, John T. Cox (secretary-treasurer of his father-in-law’s company) commissioned Hazlehurst & Huckel, a Philadelphia firm known for residential, church, and commercial architecture. The firm had recently completed another Queen Anne-style home at 323 Cooper Street, within view of the Anderson residence at Second and Cooper. One of the partners, Edward P. Hazlehurst, had worked with one of Philadelphia’s best-known architects, Frank Furness, before starting his own firm with Samuel Huckel Jr. in 1881. The stature of the partners had grown in 1887, when they won a competition to design the Manufacturer’s Club prominently located at Broad and Walnut Streets in Philadelphia; later, Huckel individually won the commission to remodel Grand Central Station in New York.

In the 300 and 500 blocks of Cooper Street, the two Hazlehurst & Huckel houses stood distinctively among the earlier generation of red-brick row houses built in the 1850s. They celebrated individuality in their varieties of materials and departures from symmetry, and they punctured the typical flat façade of earlier row houses by featuring bay windows and dormers. The house at 527 Cooper Street earned a full-page photograph in The Inland Architect and News Record, a monthly trade journal published in Chicago. (In 1894 the journal accorded the same treatment to the Henry Genet Taylor home at 305 Cooper Street, designed by Wilson Eyre Jr.)

The Cox family lived at 527 Cooper Street until 1897, when they followed the trend of other Camden elites by moving to more pastoral suburbs (Moorestown). While on Cooper Street, their household included at least two domestic servants, at least one of them an Irish immigrant.

The Cox family sold 527 Cooper Street to a real estate firm, opening a period of more than two decades when the home was leased to a series of high-profile tenants. These included four division managers for the Pennsylvania Railroad’s Amboy Division (formerly the Camden and Amboy Railroad).

Among the most notable residents of 527 Cooper during these early years of the twentieth century, future New Jersey Supreme Court Justice Frank T. Lloyd Sr. lived at this address between 1908 and 1918. Lloyd had lived in Camden since 1875, when he arrived from Delaware to work as a compositor for the West Jersey Press newspaper. He became a lawyer by studying with Philadelphia attorneys and maintained a Philadelphia law office. Elected to the New Jersey Assembly for the term 1896-97, Lloyd began a career of public service marked by combatting vice and upholding morality in his posts as legislator, Camden County Prosecutor, and Circuit Court Judge. In the Assembly, he wrote a new marriage law that ended Camden’s reputation as a place for quick get-away marriages by requiring a three-day wait after obtaining a marriage license. As a prosecutor, he took aim at illegal gambling, particularly at racetracks.

The extended Lloyd family at 527 Cooper is glimpsed in the U.S. Census in 1910, during Frank Sr.’s service as Circuit Court Judge. Lloyd, then 50 years old, headed the family with his wife, Mary, age 43; Mary’s older sister Sophia Pelouze, 50 years old and single, identified herself to the Census-taker as a “companion.” The Lloyds, who had been married 23 years, had three children ranging in age from 10 to 22.

The domestic workers in the Lloyd household added not only their labor but also ethnic and racial diversity, as in many other Cooper Street households. Katie Tellus, 31 years old, immigrated to the United States from Bavaria – a rarity among Cooper Street servants, who typically came from Ireland. A widow, she could not read or write. The Lloyds also employed James R. Taylor, a 35-year-old Black man described in the Census as a butler but listed in later city directories as a cook. Taylor, born in either Maryland or Virginia (sources vary), was among southern African Americans who migrated to Camden and other northern cities in search of opportunity and an escape from repression and violence. Taylor displayed his aspirations, and perhaps his dissatisfaction with housework, in a series of classified ads in 1912. In the Situations Wanted column of the Camden Courier-Post he advertised, “Young colored boy from South wishes position of any kind” and “Southern colored boy wants position driving for doctor.” His self-description as a “young colored boy,” despite being a man in his 30s, suggests the racial biases present in the South Jersey/Philadelphia region during the migration era.

The Lloyds’ occupancy at 527 Cooper Street encompassed the period of the First World War. Frank Sr. served on the home front as a federal food administrator while son Frank Jr. deployed to France. While in command of an aerial testing camp near Paris, Lieutenant Lloyd suffered a fall that resulted in broken jaw and two days of unconsciousness. The Philadelphia Inquirer’s lists of soldiers killed and injured identified the younger Lloyd as “wounded severely.” After their years on Cooper Street, the Lloyd family moved to Pennsauken. Frank Lloyd Sr., appointed to the New Jersey Supreme Court in 1924, lived until 1951. An editorial in the Courier-Post eulogized him as “a citizen who never will be forgotten, one whose life and character have been and will continue to be an inspiration.”

During the 1920s, construction of the Delaware River Bridge (the Benjamin Franklin Bridge) between Camden and Philadelphia propelled a spirit of boosterism with profound implications for Cooper Street. The location of the bridge, and the extension of Broadway to reach it, created a new focal point for business activity at Sixth and Cooper, adjacent to 527 Cooper Street. As real estate interests eyed the rest of Cooper Street as an opportunity to convert older homes into apartments and businesses, 527 Cooper Street became a base for their efforts to transform Cooper Street into a New York-style “Fifth Avenue.”

Several women emerged as real estate entrepreneurs during these years, among them a new owner of 527 Cooper Street, Julia M. Carey. By the time the bridge opened in 1926, the “Carey Building” at 527 Cooper offered office suites and apartments. Carey leased one of the offices to another real estate dealer, Emma M. Asay, whose gender-neutral advertising invited prospective buyers to contact “E.M. Asay.” The Courier-Post noted in 1926, “Miss Carey and Miss E.M. Asay have found Cooper street an advantageous location, as both of these ‘lady real estators’ have had two splendid selling seasons on Camden’s famous residential thoroughfare, now giving way to business.” Carey’s work on the street included three strategically located renovations, one per block, to convert 321, 421, and 521 Cooper into offices or apartments. She often collaborated with contractor John C. Gibson, also based at 527 Cooper while he worked on conversions and new construction up and down the street.

For the rest of the twentieth century and into the twenty-first century, 527 Cooper served a variety of business and professional uses, including offices for doctors, lawyers, real estate agents, and title companies. For three years in the early 1950s, the building served as headquarters for the Camden County Republican Party. By 1980, when the Camden Division of Planning surveyed Cooper Street’s historic structures, 527 Cooper Street had lost some – but by no means all – of its architectural character. “In spite of alterations to the entrance way and the removal of the second-story oriel that once occupied the left bay,” surveyor J.P. Graham wrote, “this house still conveys much of the feeling of the Queen Anne style.”

All known residents and businesses are listed in the Cooper Street database. Click here and scroll to 527.

Charlene Mires, Lucy Davis, and Nick Prehn. Thanks to Benjamin Saracco for assistance locating Manuals for the Legislature of New Jersey.