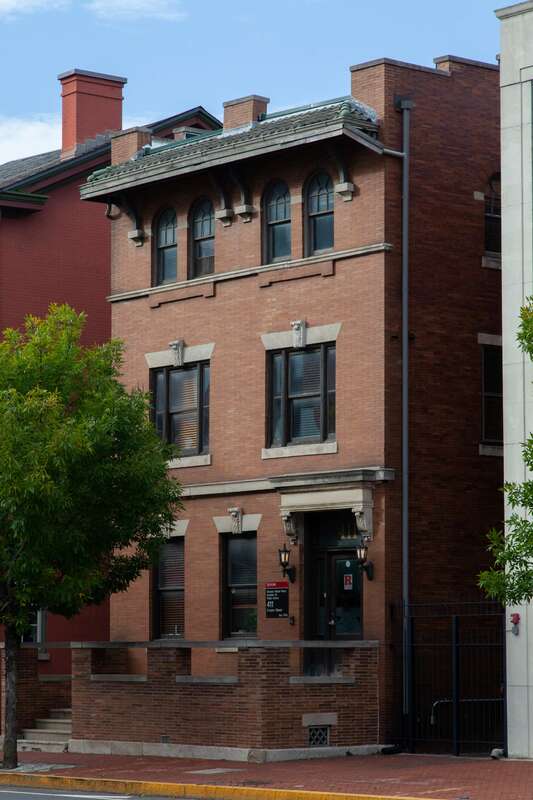 Built c. 1910, 411 Cooper Street was the last single-family home built in the blocks that later became the Cooper Street Historic District. The district is defined as representing broad patterns of American history: "The buildings within the district include Camden's best remaining examples of Federal houses and its most intact examples of nineteenth-century houses as well as important office and bank buildings of more recent vintage. These buildings demonstrate the street's change from residential and professional to commercial." The latter transition is exemplified by 411 Cooper Street, which began as a family home then turned to professional and commercial uses in the twentieth century. Its early occupants included families headed by medical professionals and business leaders; after brief service as a funeral home during the 1930s, 411 Cooper Street became an office building for real estate-related firms. Acquired by Rutgers University in the 1990s, the building became home to the Walter Rand Institute for Public Affairs. Architecturally, according to the Camden Division of Planning survey of Cooper Street structures, the house “is representative of the twentieth century extension of the urban rowhouse inspired by classical details, if not forms; and thus, is an important link in the stylistic chain displayed by the houses of Cooper Street.”

Georgian Revival/Neo-Classical (as defined in historic structure survey by City of Camden Division of Planning, 1980).

On January 17, 1910, the Philadelphia Inquirer noted that “Dr. and Mrs. Frederick A. Slack are now settled in their handsome new home at 411 Cooper Street.” On a street dominated by nineteenth-century rowhouses, the Slacks’ new residence stood apart with a distinctly more modern and grand appearance created by yellow-orange Roman-style bricks and a substantial front porch with sandstone balustrades. Unknown at the time, 411 Cooper Street was the last single-family home that would be built in the area that later became the Cooper Street Historic District.

The Slack family continued the trend of Cooper Street as a home for medical professionals. Frederick Slack, 35, was a dentist whose office was in Philadelphia; in 1910 he and his wife Lorell, 28, had a two-year-old son, Frederick Jr. The lot on Cooper Street, and perhaps the house as well, appears from deeds to have been a gift to Lorell from her uncle, Camden funeral director Fithian S. Simmons, who bought several properties on Cooper Street during the first decade of the twentieth century. He conveyed 411 Cooper Street to his niece on April 22, 1909, for the token sum of $1.

The Slacks occupied the home for its first decade as their family grew to include a second son, Thomas, born in 1912. They also employed domestic servants, showing a preference for Black help in the classified ads they placed in local newspapers. The domestic workers connect 411 Cooper Street with the history of Black migration from the South: in 1910 the U.S. Census recorded the household as including Estelle C. Williams, 18, who was born in Virginia, and in 1915 the New Jersey Census recorded Jessie Ryan, 20, also born in Virginia. In addition to live-in help, the Slacks employed laundresses up to two days a week.

While living in Camden, the Slack family spent summers at a cottage in Ocean City and visited Lorell Slack’s family in Millville, Cumberland County, on holidays. Around 1920, however, they moved to Philadelphia’s more fashionable western suburbs. By 1930 they lived in Lower Merion, Montgomery County. Their oldest son, Frederick Jr., in later life invented a method of repairing fingernails with acrylics and founded the company that became Nail Systems International (NSI).

The next two occupants of 411 Cooper Street connect the house with key manufacturing and business interests in Camden. Morris E. Noecker, president of the Noecker & Ake Ship Building Company, previously lived near his shipyard at Twenty-Seventh Street opposite Petty Island. His experiences illustrate Camden’s history as a place of business opportunity during the early twentieth century. Noecker, who was born in Leesport (Berks County), Pennsylvania, had come to Camden in 1902 and started the shipyard in 1905, specializing in building barges and other wood watercraft. On Cooper Street, the Noecker household included Morris, age 51; his wife Lizzie, age 49; and three grown children in their 20s, a daughter and two sons, all born in Pennsylvania.

The Noeckers occupied 411 Cooper Street for just three years before moving out of Camden to Collingswood. Starting in 1923 and for the rest of the 1920s, 411 Cooper Street became home to a member of the Taylor family, which had operated the Taylor Bros. flour and feed business in Camden since 1865. G. Wilbur Taylor and his family had been displaced from their earlier home in the 500 block of Linden Street by construction for the first bridge between Camden and Philadelphia, the Delaware River Bridge (later named the Benjamin Franklin Bridge), completed in 1926. At the Linden Street address, their household in 1920 consisted of G. Wilbur, 55; his wife Emilie, 50; daughter Gwendolyn, 27; and two servants, Emma Clare, a 61-year-old widow who had been born in Maryland to parents from France and Germany; and Bella Chambers, a 52-year-old Irish immigrant. Cooper Street proved to be the last home for the elder Coopers. Emilie Taylor, a lifelong Camden resident active in the Daughters of the American Revolution, died in 1928 after an illness of three weeks. G. Wilbur Taylor died in 1930. Shortly before his death, Taylor initiated construction of an elevator in the home, suggesting either infirmity or plans to join other properties on Cooper Street in converting to commercial use.

Mixed Use during the Great Depression

The house at 411 Cooper Street stood vacant in 1931 as the Great Depression deepened.  Its uses throughout the 1930s were temporary and commercial, in keeping with a movement by Camden real estate interests to establish Cooper Street as a business thoroughfare. In 1932, the funeral home Joseph H. Murray and Son temporarily moved into 411 Cooper Street after a water heater explosion damaged its usual location across the street at 408 Cooper. A restaurant called Four-Eleven opened in the building in 1934 but closed in 1935 after neighbors objected to its application for a liquor license. A gas explosion during renovations in 1936 ended a planned purchase of the building by Paul Slaughter, the president of Hunting Park Motors in Philadelphia By 1937 an undertaker, Bertha Kephart, operated her business on the first floor, and the upper floors became business and professional offices, most connected with construction and real estate activity.

During the 1940s, 411 Cooper Street gained a new family in residence, although some office uses remained in the building. Francesco D’Imperio, a physician and World War II veteran, acquired the building to use as both his office and home for his family, which included his wife Antoinette and two young sons. While Francesco advanced in his career as a gastroenterologist, Antoinette became known for her work on behalf of postwar orphans in Italy, which earned the Star of Solidarity award from the Italian government. In the 1950s, the D’Imperio family joined the trend of professionals moving from Camden to the suburbs; by 1954 they lived in Haddonfield and by 1960 they moved to Cherry Hill, where Dr. D’Imperio also located his practice.

From the 1950s through the 1970s, 411 Cooper Street housed offices and rental apartments; among the tenants in 1973, Cedric Wiggins was a student at the Rutgers School of Law and became chairman of the Black Law Student Union on the Camden campus.

In the early 1990s, following the introduction of historic preservation tax credits, Rutgers University entered into a partnership with a redevelopment firm, Vintage Living, to rehabilitate both 411 and 321 Cooper Street into modernized offices. The location of 411 Cooper, directly across the street from a new federal courthouse then under construction, positioned the building well for legal offices. The Camden County Bar Association moved in, as did several attorney’s offices offering bankruptcy and immigration services. By 1998, however, back taxes owed on the property forced a sheriff’s sale and led to title transferring entirely to Rutgers.

Under Rutgers ownership, 411 Cooper Street became home to various university offices, including the Walter Rand Institute for Public Affairs, which continued to occupy the building in 2022.

For a list of all known occupants of 411 Cooper Street, visit the Cooper Street Residents Database and scroll down to 411.


Note on sources: Earlier documentation stated this house was constructed in 1924 by G. Wilbur Taylor, based on hearsay. This research updates and corrects the record.