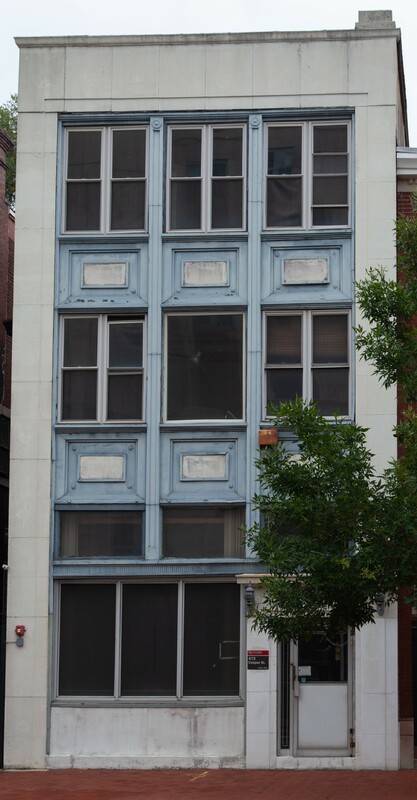 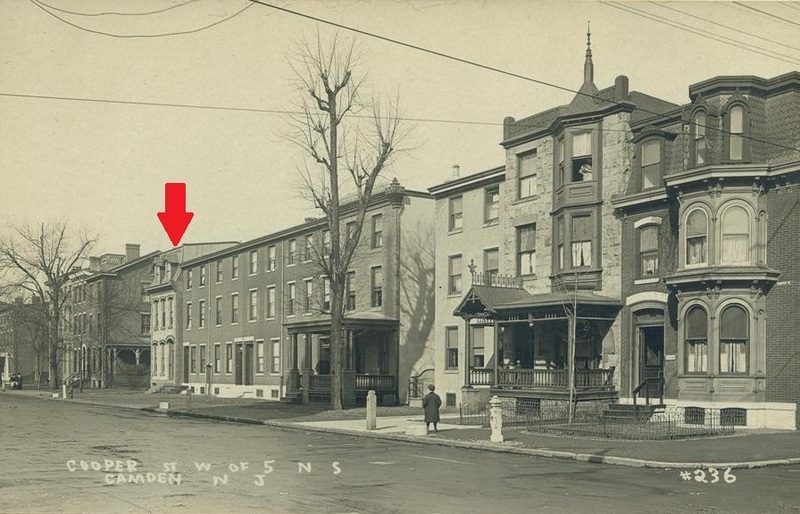 Extensively remodeled from its original appearance, the building at 413 Cooper Street and the lot where it stands embody the historical development of Camden. A commercial façade obscures a Second Empire-style house built in 1883, a stylish residence that replaced an earlier wood-frame house in the same location. The lot was part of a larger parcel purchased from the Cooper family in 1845 by a woman who lived in Philadelphia, Hannah Atwood, who managed up to seven houses built on her land as rental properties. This property, therefore, illustrates one of the defining characteristics of the Cooper Street Historic District: “These buildings demonstrate the street's change from residential and professional to commercial." Notable occupants of the houses at this address included William Doughten and Harry Humphreys, two pioneers of the lumber industry that dominated Camden’s frontage on the Delaware River during the nineteenth century. The building has been owned by Rutgers University since 2009.

The lot where 413 Cooper Street stands was among the first properties developed on the north side of Cooper Street as members of the Cooper family began to sell their inherited land during the 1840s. Among the purchasers, Hannah Atwood, who lived in Philadelphia, acquired this lot as part of a larger parcel in 1845. Atwood’s purchase spanned sixty-five feet on Cooper Street east of Fourth and extended north to Lawrence Street. Seven houses were built on the property during Atwood’s ownership, including a wood-frame house at 413 and two others facing Cooper Street, and four smaller houses facing Lawrence Street.

The property at 413 Cooper Street was described in 1847 in an advertisement placed in the Philadelphia Public Ledger: "A modern built three-story Frame Hoe, with two-story Back Building, with a choice lot of Fruit Trees in the yard. The lot is 23 feet front by 150 deep to a back street. This property is pleasantly situated and in a good neighborhood." Although offered for sale at that time, the lot and the buildings upon it remained with Atwood.


Rental Income for an Artist’s Family

The Camden houses, managed as rental properties, provided steady income for Atwood, a married woman whose husband, an artist, was frequently absent and dependent on patrons for income. Jesse Atwood, born in New Hampshire, was an itinerant portrait painter who became best known for a journey to Mexico to paint General Zachary Taylor during the Mexican-American War. He also painted portraits of presidents, including Abraham Lincoln, and promoted this work to entice other patrons as he traveled.

According to Who's Who in American History, Hannah and Jesse Atwood came to Philadelphia from Rhode Island around 1830, which may have been shortly after their marriage. The Atwoods appear to have lived in the wood-frame house that stood at 413 Cooper Street in the late 1840s; during that time, Jesse Atwood created a bust from his portrait of Zachary Taylor and offered it for sale. They lived in Camden again between 1855 and 1860, but otherwise they lived in Philadelphia. Throughout the 1860s and 1870s, other tenants occupied the row houses on Hannah's Cooper Street land (spanning 413, 415, and 417 Cooper). From 1861 to 1863, the occupants of 413 Cooper included William T. Doughten, who moved to Camden in the 1850s to establish a lumber business at Kaighn’s Point. (Doughten next purchased a home up the street at 427 Cooper.)

Jesse Atwood died in Philadelphia in 1870, at the age of 79, and Hannah lived until 1883. Both are buried in Philadelphia’s Laurel Hill Cemetery. Hannah's will specified the houses at 415 and 417 Cooper Street as bequests to her granddaughter Clara Fisher, without mentioning the adjoining property at 413. Although Atwood envisioned the houses as an ongoing source of independent income for her granddaughter, Clara's husband sold 413 Cooper Street to its tenant, Restore Lamb, in 1883, and Clara sold 415 and 417 Cooper Street by 1888. Hannah Atwood's long record of ownership on Cooper Street faded from memory.

At the time of Hannah Atwood’s death, Cooper Street was undergoing a transformation to a more fashionable residential address. In the early 1880s, the Camden City Council approved a resident’s proposal to move the curb lines of Cooper Street properties into the street by twelve feet on each side, thereby creating room for gardens or lawns in front of every house. The more bucolic thoroughfare touched off an era for construction of new, more fashionable homes. At 413 Cooper Street, an older wood-frame house gave way to a Second Empire-style house with a stone façade and mansard roof, described by the Camden Courier as a “comfortable dwelling replete with modern conveniences.” Restore Lamb, the tenant who bought the earlier wood-frame house, carried out the redevelopment project in 1883 shortly after his daughter, Lizzie, died in the old house of typhoid fever at the age of 25. He then sold the new house in 1884 to a commission fish merchant, Albert Rowe, who moved from Second Street with his wife, Henrietta, and two children. They employed at least one domestic servant, an Irish immigrant named Kitty Keelan.

The house at 413 Cooper Street changed hands again in 1887, opening a long-term period of occupancy by the family of lumber merchant Harry Humphreys that lasted into the 1920s. Humphreys, in his early 30s when he bought the home, had recently opened his own lumber business on the Camden waterfront after years working for other firms. The Humphreys family, which had been living nearby on north Third Street, also included Humphreys’ mother, his wife, and a young son. The family employed domestic servants, usually young, female Irish immigrants.

Harry Humphreys’ mother, Evaline, died in 1892, but the family also expanded with two additional children who grew up in the Cooper Street home. Harry Humphreys took an active role in civic affairs as well as in business, serving on the Camden Park Commission and for a time as a city councilman. He served as a vestryman of St. Paul’s Episcopal Church a block away on Market Street. The Camden Morning Post once described him as a man with a memorable smile: “… he was a man who seemed always in the brightest of moods, a man who found a rare satisfaction in his associations with other men, a man who knew nothing of cynicism but ever made the most of the good things which life has to offer.”

Humphreys parted with the home at 413 Cooper Street in the 1920s, when he was in his 60s, in a decade when Camden real estate interests sought to transition Cooper Street into a commercial corridor. (Humphreys’ cousin, Louis Humphreys, was a leading real estate broker.) After selling the house to a pair of lawyers in 1928, Harry Humphreys and his wife, Susanna, divided their time between the new Walt Whitman Hotel in Camden and the home of a married daughter in Merchantville.

The two lawyers who bought 413 Cooper Street, Joseph Beck Tyler and A. Moulton McNutt, may have been responsible for the new commercial façade that obscured the structure’s earlier history as a family home. Beginning their purchase in 1928, the building primarily housed office tenants but retained at least two rental apartments that were documented by the U.S. Census in 1940. In addition to the Tyler law firm, which grew to include two grown sons in the 1940s, the building housed offices for an insurance agent, an engineer, and a mortgage company. During the 1940s, its business tenants included an optician and a dentist. Like the owners of the building, these business and professional people maintained offices in Camden but lived in the suburbs.

By the late 1960s, the building had passed to heirs of Tyler and McNutt and notices for sheriff’s sale and foreclosure appeared in the Camden Courier-Post. It was acquired in 1980 by Nise Productions, notable as the producer of the television program Dancin’ On Air–but Camden served only as the mailing address for the show, which was telecast on Channel 17 from a studio in West Philadelphia. Nise Productions sold the building to Rutgers University in 2009.

For a list of all known occupants of 413 Cooper Street, visit the Cooper Street Residents Database and scroll down to 413.

Note on sources: Earlier documentation stated this house was constructed c. 1860 with alteration c. 1910. This research updates and corrects the record.