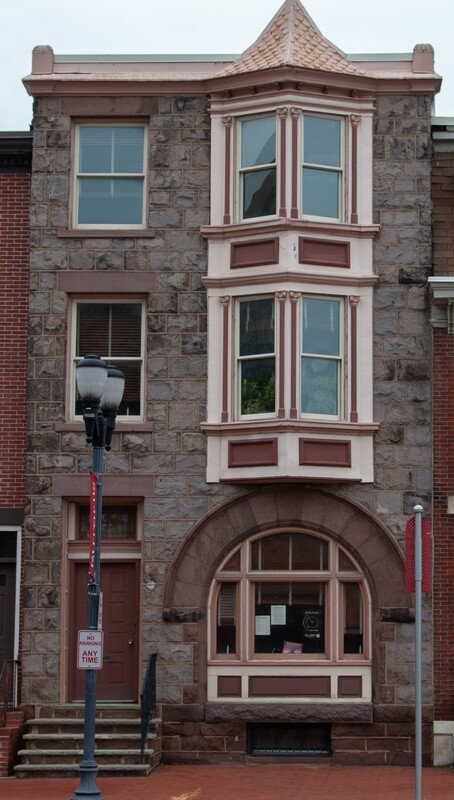 Near the intersection of Fifth Street, 427 Cooper Street is among the large residences of the 1880s and 1890s that represent the height of Camden’s nineteenth-century prosperity and the subsequent transitions of a fashionable neighborhood following the 1926 completion of the first bridge across the Delaware River to Philadelphia. The residence, designed by the Moses & King architectural firm of Philadelphia, contributes to the National Register of Historic Places’ recognition of Cooper Street’s significance in the nineteenth and early twentieth century, “when industry, commerce, and agriculture combined to make this city the economic and urban center of Southern New Jersey.” In its uses over time, the house demonstrates transitions from nineteenth-century trades to real estate development and the practice of medicine in the houses on Cooper Street. In this way it supports the statement of significance for the National Register: “These buildings [in the district] demonstrate the street's change from residential and professional to commercial."

The distinctive stone house at 427 Cooper Street replaced an earlier brick house that stood at the same location from at least the 1850s. The north side of Cooper Street filled with rowhouses during the late 1840s and early 1850s as members of the Cooper family sold their inherited land.

Early owners of the lot at this address included Thomas W. Dyott Jr., a Philadelphia wholesaler of patent medicines who bought the property in 1852 (in addition to the adjacent corner lot at Fifth and Cooper, which he had acquired in 1846). In business with his father, also named Thomas, Dyott sold remedies such as Mrs. Winslow's Soothing Syrup for quieting babies and cures for rheumatism, liver ailments, and other maladies. His father had immigrated England in 1805 opened a drug store, claimed to be a doctor, and became one of the nation's leading purveyors of patent medicines. Seeking bottles for his remedies, the elder Dyott also went into the bottle manufacturing business and by the 1820s had a thriving complex of factories in the Kensington section of Philadelphia. That venture grew into a company town called Dyottville but collapsed in bankruptcy after a run on its bank during the panic of 1837. The patent medicine business remained active during the 1850s as T.W. Dyott & Sons.

City directories document Thomas Dyott Jr. as a Camden resident at "Cooper above Fourth" from 1855 to 1857, and his lot at 427 Cooper Street included a brick house by the time he sold it in 1860. Documented that year in their next home in Philadelphia, the Dyott family included Thomas, his wife Sarah, four children ranging in age from 8 to 16, two Irish immigrant domestic servants, and two boarders. Dyott also sold his adjacent corner lot at Fifth and Cooper Streets to a new owner in 1860.

The next owner of 427 Cooper Street, builder Thomas Atkinson (later a mayor of Camden), resold it just two years later. This transaction in 1862 opened a long period of ownership by William T. Doughten, a pioneer in Camden’s riverfront lumber industry. Doughten had moved to Camden from Gloucester City in the 1850s to establish a lumber business at Kaighn’s Point. Before acquiring 427 Cooper Street, Doughten and his wife, Abigail, had rented another home in the same block, a less substantial wood-frame house at 413 Cooper Street. At the new address, by 1870 their household included two sons and two daughters, two unrelated women seamstresses, and a domestic servant, Phebe Oney, described in the 1870 Census as “mulatto,” born in Delaware and illiterate. Although the family moved elsewhere in Camden in the 1870s and 1880s, Doughten retained ownership of the house as an investment property. Among the tenants was a dentist, Alphonso Irwin, who had his home and office at 427 from 1881 until 1885, when he purchased the house next door, 425 Cooper Street, which still stands.

The property changed ownership in 1889 during the greatest takeoff of Camden’s population, which nearly tripled between 1880 and 1920, from about 41,000 to more than 116,000 people. Cooper Street also changed in the early 1880s after residents persuaded the City Council to move curb lines toward the center to create twelve-foot front yards for the length of the street. The more pastoral setting touched off a trend of new houses that stood in contrast to earlier rowhouses as much larger, fashionable statements of their owners’ success and ambition in business.

In place of the earlier house owned by Doughten, real estate broker James White built a new house designed to serve as both his office and residence for himself, his wife, and two daughters. The Whites engaged the Philadelphia architectural firm Moses & King to design a distinctive home that incorporated a strong statement of Richardsonian Romanesque style with a stone arched window on the first floor but also ornamental touches that could be described as Queen Anne, a style that gained in popularity in the United States following its appearance at the 1876 Centennial Exhibition in Philadelphia. The residence thus combined two architectural statements in one building, speaking to two purposes as home and office. Moses & King were known for designing churches as well as residences, which may help to explain the stained glass installed over the front door.

The White family remained at 427 Cooper Street until the 1920s. After the death of James White in 1902, his wife Margaret became one of several widows heading households in the 400 block of Cooper Street. Her family in the first decade of the twentieth century included a married daughter, the daughter’s husband, and a grandchild. The house they occupied changed in appearance with the addition of an ornamental front porch that obscured the heavy Romanesque arched window of the first floor.

By the 1920s, suburbanization and the construction of the Delaware River Bridge—later the renamed the Benjamin Franklin Bridge—were changing Camden, and so too the occupants and fates of houses on Cooper Street. By the middle 1920s, demolition made way for the bridge and construction of the new Plaza Hotel at Fifth and Cooper Streets signaled a more commercial future for the area around the White family home, an evolution pursued intensely by Camden boosters and real estate interests.

The house at 427 Cooper Street became a medical office as well as a home in 1922 when Mary White sold it to a doctor, Oscar Grumbrecht, and his wife, Mary (who held title to the property). After the Grumbrechts moved again to another house on Cooper Street in the mid-1920s, 427 was divided and rented to tenants. As Camden became a recorded-music mecca with the rise of RCA-Victor, the tenants included a World War I veteran named Edwin Wartman who lived at 427 Cooper from 1929 to 1931 while working as a Vitaphone recording system operator (and later a movie projectionist). During the Great Depression, 427 became a boarding house with boarders and lodgers including factory workers, waitresses, and a draftsman employed by the Works Progress Administration (WPA). By the 1940s, the building housed businesses that included a dealer in hearing aids and a real estate agent, and in the 1950s its tenants include a lawyer’s office.

By the 1970s, 427 Cooper Street reflected the overall decline of Cooper Street properties and appeared frequently in legal notices for sheriff’s sales to recover back taxes. Finally, in 2008 absentee owners with a Florida address sold the property to Rutgers University. A renovation project completed in 2011 joined 427 Cooper Street with the house next door (429) to create offices for the Rutgers-Camden Department of History and the Department of Philosophy and Religion.

For a list of all known residents of 427 Cooper Street, visit the Cooper Street Residents Database and scroll down to 427.

Note on sources: Previous documentation dated the construction of this house as c. 1882 and labeled it the “Isaac Doughten House.” This research updates and corrects the record.