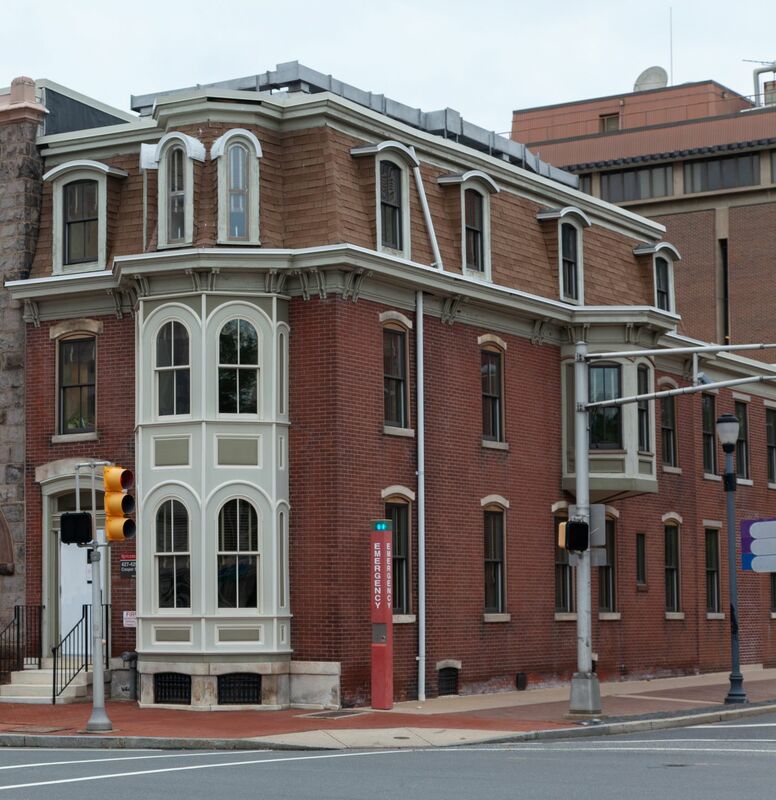 On the northwest corner of Fifth and Cooper Streets, 429 Cooper Street is among the residences of the late nineteenth century that represent the evolution of the street into one of Camden’s most fashionable addresses and its subsequent transitions following the 1926 completion of the first bridge across the Delaware River to Philadelphia. In its uses over time, the house demonstrates transitions from nineteenth-century trades to real estate development and the practice of medicine in the houses on Cooper Street. In this way it supports the statement of significance of the Cooper Street Historic District for the National Register of Historic Places: “These buildings [in the district] demonstrate the street's change from residential and professional to commercial." Documentation by the City of Camden Division of Planning in 1980 described 429 Cooper Street as “an excellent vernacular working of the Second Empire style [that] contributes to the late nineteenth century quality of Cooper Street with its variety of residential structures.”

The northwest corner of Fifth and Cooper Streets has been occupied by a residence since at least 1857, when it was represented on a map of Camden County as part of a row of structures spanning most of the 400 block of Cooper Street. Houses rose rapidly on the north side of Cooper Street for the first time during the late 1840s and early 1850s as heirs of the Cooper family sold their land for development.

Among the early owners of the lot at this address was Thomas W. Dyott Jr., a Philadelphia wholesaler of patent medicines who bought the property in 1846 and then the lot next door (427 Cooper Street) in 1852. In business with his father, also named Thomas, Dyott sold remedies such as Mrs. Winslow's Soothing Syrup for quieting babies and cures for rheumatism, liver ailments, and other maladies. The business had grown to one of the nation's leading purveyors of patent medicine under his father, who had immigrated England in 1805, claimed without foundation to be a doctor, and started selling miracle cures. Seeking bottles for his remedies, the elder Dyott also went into the bottle manufacturing business and by the 1820s had a thriving complex of factories in the Kensington section of Philadelphia. That venture grew into a company town called Dyottville but collapsed in bankruptcy after a run on its bank during the panic of 1837. The patent medicine business remained active during the 1850s as T.W. Dyott & Sons.

City directories list Thomas Dyott Jr. as a Camden resident from 1855 to 1857 at "Cooper above Fourth" (not "Fifth and Cooper"), suggesting that he and his family lived next door at 427 Cooper Street, not on the corner. When he sold both properties in 1860, the 429 Cooper Street lot included a frame house next occupied by Lewis Wilkins, a livery stable operator. Wilkins, who had moved into Camden from Burlington County in the 1850s, had a good location for a stable in the growing city, near the ferries that crossed to Philadelphia. At 51 years old in 1860, his household at 429 Cooper included his wife, Rebecca; their 20-year-old daughter Katura (Kate); Rebecca’s mother, Katura Moore, and her sister, Emeline Dobbins, a nurse. In a later U.S. Census, Kate was noted as having a “spine disease,” which could explain the presence of a nurse in the family.

Wilkins, his immediate family, and various other relatives lived at 429 Cooper Street for twenty years, and during that time Wilkins improved the house in keeping with architectural fashion. In 1869, he added a mansard roof, a hallmark feature of the French-inspired Second Empire architectural style very popular in the United States during the 1860s and 1870s. In the same year, Second Empire mansards were adopted for a new mansion built nearby by a member of the Cooper family (406 Cooper Street, still standing in the twenty-first century) and for other less grand houses rapidly filling Penn and Linden Streets. Across the river, Philadelphia officials chose the same style for the new City Hall then under construction.

After Rebecca Wilkins died in 1880, Lewis Wilkins at age 70 sold his property to a real estate broker, Joseph J. Read. The experiences of the real estate man had spanned the changing worlds of work and opportunity in the nineteenth century. Born in Camden in 1815, in his youth in South Philadelphia Read learned the craft of coopering—barrel-making—and he practiced this trade in Camden as late as the 1860s. But in the 1860s and 1870s Read also began to buy and renovate houses and at least one office building in Camden, and he amassed enough wealth to also invest in property in Philadelphia and Atlantic City. Established in the real estate business, the former cooper moved to Cooper Street.

Read’s purchase of 429 Cooper Street occurred at the start of the greatest takeoff of Camden’s population, which nearly tripled between 1880 and 1920, from about 41,000 to more than 116,000 people. In the early 1880s, residents of Cooper Street sought to distinguish their thoroughfare in this growing city by narrowing the street to create front yard spaces that allowed for gardens, small yards, or front porches. The change in the streetscape prompted a wave of construction of grander, architect-designed houses. For his part, Joseph Read gained approval from the Camden City Council “to alter and change the frame dwelling house at the northwest corner of Fifth and Cooper streets by extending the same to the house line on the north side of said Cooper Street.”

Read’s proposed renovation in 1882 raises a question of when – and how – the original frame house at 429 Cooper Street became the brick house that remained standing at 429 Cooper Street in the twenty-first century. The historic building survey conducted in 1980 prior to National Register listing dated the house as c. 1880, consistent with Read’s purchase of the property. But the sources for this report did not include two key pieces of evidence: local newspaper reports that Lewis Wilkins added a mansard roof in 1869 and that Read in 1882 requested to renovate a house that was frame (wood), not brick. The still-standing brick house has both a mansard and a front bay consistent with Read’s 1882 proposal – could it be the same house, further renovated with brick facing by Read, or did he rebuild entirely? There is no answer in the known public record, but by 1885 the Sanborn Insurance Company map for Camden lists only brick houses in the 400 block, and the 1891 map depicts a brick house on this corner of Fifth and Cooper Streets.

For Read, a recent widower, 429 Cooper Street became the home of his second marriage, in 1881 to Elizabeth Schellenger (in public records of the late nineteenth and early twentieth century also spelled Schellinger), the widow of a sea captain. Their extended household included Elizabeth’s son William Schellenger, a clerk, and Edward A.Y. Schellenger (known as Ned), who during the 1890s completed medical school at the University of Pennsylvania and returned to Camden to practice. While William moved to the Philadelphia suburbs after his marriage in 1891, Ned remained in the household at Fifth and Cooper. After Joseph Read died in 1898, Ned headed the extended family including his mother, his wife Lillian, their son also named Edward, and their daughter Elizabeth. The family also employed domestic servants and a driver for the doctor; those that can be documented were African Americans: Julia Burse, a 36-year-old widow at the time of the 1900 Census, was born in Maryland. Mary Taylor, who worked in the household in 1910, was also a widow, 61 years old and born in New Jersey. She cooked for the Schellengers for at least a decade.

The house at 429 Cooper Street also served as a medical office for Edward A.Y. Schellenger, adding to Cooper Street’s reputation as a location for medical professionals. Front parlors on the first floors of nineteenth-century homes served well as offices, and the physicians were within walking distance of Camden’s Cooper Hospital. Schellenger specialized in surgery, and in addition to a growing practice served on the Board of Managers of the County Tuberculosis Hospital.

While occupying 429 Cooper Street, the Schellenger family confronted medical challenges of their own: their daughter, named Elizabeth after her grandmother, contracted polio in 1913. She lived six years longer, until age 18, when a cold developed into pneumonia and caused her death. The Camden Morning Post noted that “although handicapped by deformities,” Elizabeth took an active part in combatting the influenza epidemic of 1918-19. “She was an accomplished automobile driver, despite her tender years and day after day … she was busy conveying nurses, attendants, patients, and Red Cross workers to and from hospitals.”

By the time of Elizabeth’s early death, her father also had succumbed to complications from an illness that was publicly described only as a “serious ailment” that he had treated in others as a surgeon. In 1917, he cited ill health when he resigned his position with the Tuberculosis Hospital. While hospitalized shortly thereafter, he experienced burns from an x-ray that were blamed for a subsequent burst artery that ended his life. He was 47 years old.

The house at Fifth and Cooper Streets remained home for Schellenger’s widow, Lillian, and son Edward until the mid-1920s, but then they joined other prominent Camden families in relocating to suburban Merchantville. Cooper Street was by that time taking on a distinctly more commercial atmosphere as the opening of the Delaware River Bridge (later renamed the Benjamin Franklin Bridge) prompted changes such as the construction of the Plaza Hotel diagonally across the street from the Schellenger home. The Schellengers retained ownership of 429 Cooper Street, but a real estate firm renovated the building into offices and at least one apartment. In 1930, the apartment was rented by a church organist and his family. By 1940, the residential tenants included a German-born Naval draftsman and his family and a second household consisting of a widowed artist and her adult daughter, a secretary.

In the 1940s, 429 Cooper Street once again became a location for medical offices, this time for doctors who practiced in Camden but chose to live in the suburbs. Among them was the son of the original Dr. Schellenger, also named Edward. The younger Schellenger, a gynecologist, opened his practice after graduating from Thomas Jefferson Medical College in Philadelphia. World War II interrupted his career in Camden as he served with the U.S. Army Medical Corps in Africa and the Middle East. While overseas, he met the Army nurse who became his wife, Margaret Clayton; they raised their family of two daughters and a son in Merchantville.

The younger Edward Schellenger donated 429 Cooper Street to Rutgers University in 1977. After housing student health services for Rutgers-Camden during the 1990s, the building gained a new purpose in 2011 through a renovation that joined it with adjacent 427 Cooper Street to create office spaces for the Rutgers-Camden Department of History and the Department of Philosophy and Religion.

For a list of all known occupants of 429 Cooper Street, visit the Cooper Street Residents Database and scroll down to 429.

Note on sources: Previous documentation dated the construction of this house as c. 1880 and labeled it the “Joseph J. Read House.” This research updates the record and raises questions about the date of construction.