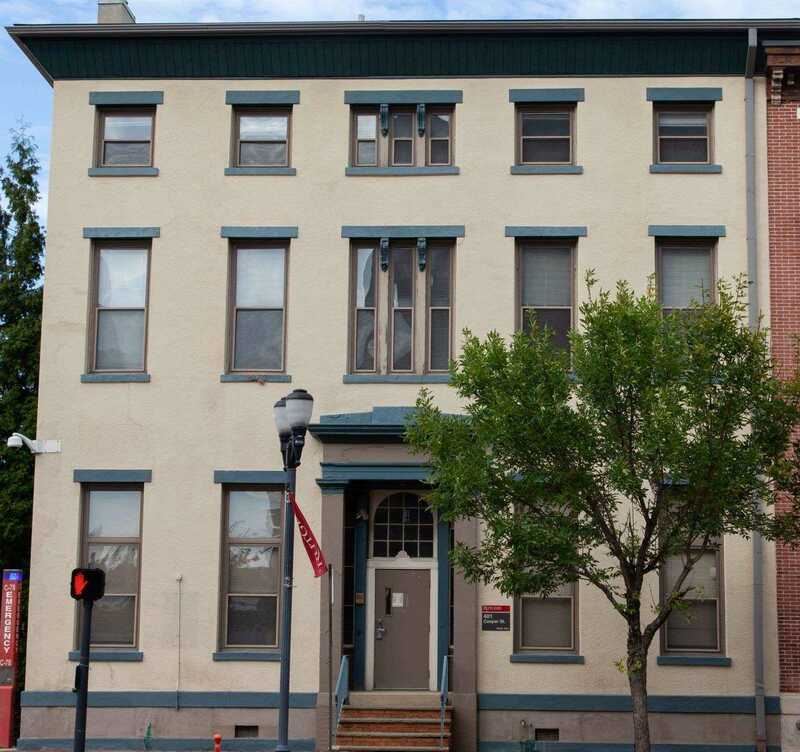 401-03 Cooper Street is a contributing structure of the Cooper Street Historic District, listed on the New Jersey and National Registers of Historic Places. Documentation prepared by the Camden Division of Planning in 1980 noted, “In spite of stuccoing and alterations to the door, it remains one of the important visual links between Cooper Street’s pre- and post- Civil War development.” The scale of the house reflects the wealth and status of pioneers in Camden’s lumber industry during the nineteenth century; occupants over time included a prominent banker, a leader of the New Century Club of Philadelphia and the General Federation of Women’s Clubs, a female physician who founded a clinic for underprivileged women and children in West Philadelphia, and a future dean of Rutgers-Camden. In the 1920s the building transitioned to office and apartment use, thus exemplifying one of the Cooper Street Historic District’s stated qualities of significance, “the street's change from residential and professional to commercial." Owned by Rutgers University since the 1970s, the building became home to the Departments of Political Science and Public Policy and Public Administration.

The double-lot residence at Fourth and Cooper Streets, originally the home of a lumber dealer’s family, is a testament to the prominence and prosperity of the lumber industry in nineteenth-century Camden. Lumber yards and sawmills began to populate the Camden riverfront in the 1830s and thrived for decades as the city’s dominant industry. Unlike Philadelphia across the river, Camden had an advantage of undeveloped river flats where rafts of cut timber could be accumulated. Timber came down the Delaware River from northern Pennsylvania and southern New York and filled Camden’s riverfront from Cooper Street north to Cooper’s Point. Lumber entrepreneurs also obtained Pennsylvania white pine after it traveled down the Susquehanna River to Marietta, Pennsylvania, in Lancaster County and to Port Deposit, Maryland. Once in Camden, the timber became the lumber and building products that railroads carried across South Jersey to build newly developing towns.

The financial success of one of Camden’s lumber dealers, George W. Carpenter, can be seen in his home at 401-03 Cooper Street – a residence double the size of any other built in this block of Cooper Street during its first generation of development. Carpenter bought the adjoining lots in 1849 from an heir of the Cooper family, which had begun to sell land on the north side of Cooper Street for development. The purchase was among sixteen real estate purchases by Carpenter during the period from 1846 to 1859, a pace of investment enabled by his success as a lumber dealer. Carpenter, who was born in Massachusetts, had migrated to New Jersey sometime before 1830, the year he married Susan Heigh in Cumberland County. By 1841, together with a partner he was operating a lumber mill on Front Street near the riverfront.

As it rose during late 1849 and early 1850, the new house attracted attention from the Philadelphia Inquirer, which called it "one of the handsomest mansions any where near Philadelphia," and from the Philadelphia Public Ledger, which noted its front facade constructed of Connecticut brownstone. When they moved into their new home in 1850, the Carpenter household consisted of George and Susan Carpenter, their three sons ages 11, 13, and 14, and a sister or other female relative of Susan. The Carpenters added to their holdings in 1854 by purchasing the adjacent lot at 405 Cooper Street, which remained undeveloped until its sale to one of their grown sons in 1868. George Carpenter’s business endeavors meanwhile extended from lumber into manufacturing, and he became regarded as “one of the business pioneers of our city,” in the words of the Camden Democrat. By the time of his death in 1870, he was taking an interest in the development of Atlantic City as a member of the Board of Directors of the Camden and Atlantic Railroad Company. His widow, Susan, remained in the Cooper Street house until 1887.

A family that united two of Camden’s economic foundations – lumber and banking – became the next owners of 401-03 Cooper Street. Wilbur F. Rose, a banker, and Mary Whitlock Rose, the daughter of a lumber merchant, moved into the grandest house on the block from a smaller house across the street (406 Cooper Street) that had been in her family since before their marriage in 1869. By the time of the move in 1888, Wilbur Rose had advanced from clerk to cashier of National State Bank of Camden. The family included two young daughters, 13-year-old Elsie and 10-year-old Mary Caroline, and Mary’s widowed mother, Ann Whitlock. (A son had died in infancy.) At various times the Rose household included other extended family members and Black domestic servants.

With the benefits of substantial income and help to run the household, Wilbur and Mary Rose both became active in civic and charitable causes. As Wilbur Rose continued to advance to the position of vice president of the bank, he invested energy in a vast array of Camden business and charitable activities, from directorships with railroads and insurance firms to service on behalf libraries, poverty relief, and child welfare. Mary Rose, known for her interest in literature and the arts, expanded her public activities after two personal losses in 1891: the death of her mother as well as her younger daughter, who succumbed from scarlet fever at the age of 13. In keeping with the usual custom of the time, their funerals were held in the home.

During the 1890s, Mary Whitlock Rose became especially prominent in women’s club circles in Philadelphia and nationally. She ascended to the presidency of the New Century Club in Philadelphia, a group that had formed after the nation’s Centennial in 1876, and she became a vice president of the General Federation of Women’s Clubs. The New Century Club, originally devoted to literature and other cultural pursuits, had become active in progressive reform work by the time of Rose’s leadership. In speeches, Rose promoted the idea that clubs should become increasingly democratic and less defined by social class. She spoke on contemporary issues, including immigration and “The Possibilities of the New Woman.” During this era, the New Century Club’s guests at its clubhouse on Twelfth Street included Susan B. Anthony and Jane Addams, the Chicago reformer who addressed the group on the subject of child labor.

Mary Rose’s surviving daughter, Elsie (known in adulthood as Elise Whitlock-Rose), accompanied her on trips to General Federation of Women’s Clubs meetings, and together they toured in Europe. Elise, who was educated at the Springside boarding school in Philadelphia’s Chestnut Hill section, acquired fluency in French and a passion for French culture and history. After her school days she channeled this interest into a series of books about cathedrals and cloisters of France, researched in Europe and published between 1906 and 1914.

The death of Mary Whitlock Rose from “a lingering illness” in 1907 left a $50,000 estate to Elise and her father, Wilbur, who remained at 401-03 Cooper Street together. They employed two domestic servants, recorded in the 1910 Census as Black women born in Delaware: Mary Harris, 19, and Rosa Johnson, 64. It was around this time that Elise Whitlock-Rose embarked on her own path of community service. In her late 20s she enrolled in the Woman’s Medical College of Pennsylvania, where she completed her M.D. degree in 1914. With another Woman’s Medical College graduate, Elizabeth F.C. Clark, she opened a clinic in West Philadelphia to serve underprivileged women and children, the Clinic of Notre Dame des Malades (Our Lady of the Sick). The clinic served patients for more than 30 years. Following the outbreak of World War I, which occurred while she was traveling in Europe with her father, Elise also sought to aid France by starting a war relief agency, which she called the Little House of Saint Pantaleon. She revived it in 1939 to help France at the start of World War II.

Elise Rose’s career as a physician entailed a move to Philadelphia, where she was joined by her father, who retired from business in 1912, in a home on Twenty-Second Street near Rittenhouse Square. The Rose family’s occupation of 403 Cooper Street came to an end in 1916.

During the 1920s, 401-03 Cooper Street converted from a family home into physicians’ offices and apartments, a common pattern on Cooper Street during the period of construction of the nearby Delaware River Bridge (later renamed the Benjamin Franklin Bridge), which opened in 1926. Expecting a business boom in Camden, real estate interests promoted Cooper Street as a potential New York-style Fifth Avenue lined with offices and apartment buildings. They bought, renovated, and sold or managed numerous former residences in pursuit of this vision. (It is perhaps during this period of renovations that 401-03 Cooper Street gained its coating of stucco.) The physicians who subsequently owned 403 Cooper Street from the 1920s through the 1960s maintained practices in Camden but primarily lived in suburban Haddonfield. In addition to other doctors’ offices, tenants in the building included a dressmaker, Eva Smith, who lived in one of the apartments from 1929 until at least 1945. Her neighbors over that span of time included schoolteachers, a secretary, a boiler fireman, and a returning World War II veteran.

By the 1960s, students at Rutgers University were among the apartment tenants at 401-03 Cooper Street as the university expanded its campus north of Cooper Street through urban renewal demolitions in 1962-64. During this period of significant growth for Rutgers-Camden, one of 401-03 Cooper’s apartment dwellers was student Margaret Marsh, Class of 1967. Later earning graduate degrees at Rutgers and becoming a renowned scholar of the histories of women, gender, and medicine, Marsh returned to Rutgers-Camden in 1998 as Dean and later Executive Dean of the Rutgers-Camden Faculty of Arts and Sciences. She also served as Chancellor - twice, from 2007 to 2009 and from 2020 to 2021 - on an interim basis.

By the late 1970s Rutgers University owned 401-03 Cooper Street, which became home to the Departments of Political Science and Public Policy and Administration.

For list of known occupants of 401-03 Cooper Street, visit the Cooper Street Residents Database and scroll down to 403.

Note on sources: Previous documentation estimated the construction date of this house as 1850. The revised date 1849-50 is based on the following account published in the Philadelphia Inquirer on September 28, 1849: "We observe with pleasure that within the last few months a very active spirit of improvement has been evident in Camden. On Cooper street, one of the handsomest mansions any where near Philadelphia, has been erected by Mr. George Alexander Carpenter, of the Flour and Saw Mills, Camden. It is now nearly completed, under the superintendence of Mr. [illegible] Hall, contractor -- Mr. J.W. Brister, bricklayer, Mr. Simpson, stone mason, and Mr. S. Sexton, cementer and plaster. The rooms of the different stories vary from 10 to 15 in height. Mr. Hoxie, we learn, was the architect." A subsequent article in the Philadelphia Public Ledger, January 26, 1850, noted the house was "nearly finished." This article also described the materials: "Its front, door and window frames are constructed of Connecticut borwn stone of a superior quality and dimensions."