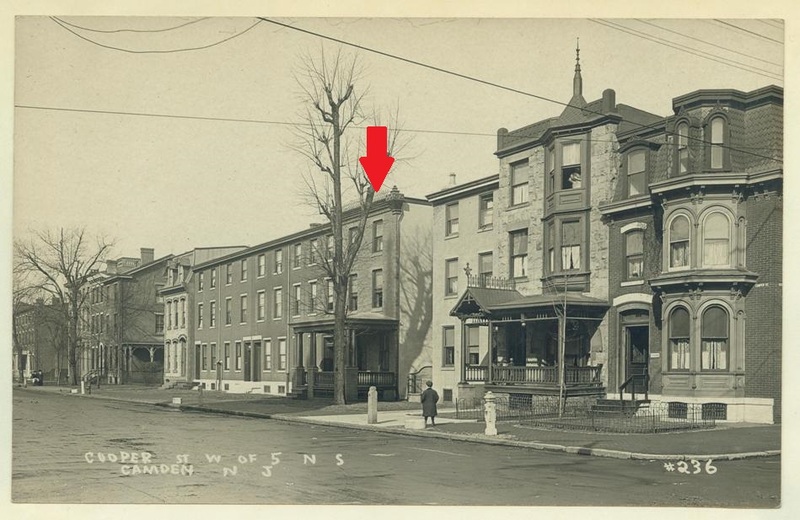 423 Cooper Street was the site of a contributing structure of the Cooper Street Historic District, which is listed on the New Jersey and National Registers of Historic Places. The district is defined as representing broad patterns of American history, including: "The buildings within the district include Camden's best remaining examples of Federal houses and its most intact examples of nineteenth-century houses as well as important office and bank buildings of more recent vintage. These buildings demonstrate the street's change from residential and professional to commercial." The latter transition was well illustrated by 423 Cooper Street, which began as a family home then became a funeral home from the 1920s through the 1960s. The house was demolished in the early 1990s.

The house that stood at 423 Cooper Street for nearly 150 years was among the first houses built on the north side of Cooper Street as Cooper family heirs sold their land for development. When they began to divide their land into building lots in the 1840s, Camden was seeking new status as the seat of government for newly designated Camden County, formed from Gloucester County in 1844.

Jesse Townsend and his wife, Elizabeth, came to Camden in 1847, two years after they were married at the Byberry Friends Meeting in the rural northern reaches of Philadelphia. They had one infant daughter when Jesse took a job as a clerk at the State Bank of Camden, one of the institutions that marked the emergence of Camden as a city in its own right, not merely a satellite of Philadelphia across the river. The Townsends purchased the 423 Cooper Street lot and in their new house, likely a Greek Revival brick rowhouse like others in the 400 block, their family grew during the 1850s to include five children – four girls and a boy – in addition to Elizabeth Townsend’s mother, Mary Wilson.  Jesse Townsend ascended to cashier of the bank. When he also entered into partnership in a flour and grain business, his business partner Caleb Parry also lived with the family for a time.

In 1862, the Townsend family sold the house and moved to 215 Cooper Street, closer to the bank at Second and Market Streets. New owners who lived in Woodbury rented out the house for the rest of that decade. Notably, in 1870 the tenants of the house included Richard and Mary Esterbrook, immigrants from England. Richard Esterbrook was the founder of the Esterbrook Steel Pen Company, founded in Camden in 1858 and on its way to becoming one of the world’s leading producers of steel pen nibs.

The house underwent a major renovation by its next owner, Frederick Rex, a bank clerk in his 20s who later became a prominent attorney. When advertised for sale by its previous owners from Woodbury, the house was described as having “six chambers, and bath room, parlor, dining room and kitchen; water and gas in the house which is in good order.” Rex apparently saw room for improvement and contracted with a builder in 1875 to “tear down, build up, and repair” the 30-year-old rowhouse. The result was a home that stood out from others on the block with Italianate details. Rex then sold the house to the family who also lived there with him, feed and flour dealer Charles C. Reeves, his wife Elizabeth, and their two children.

A sheriff’s sale of 423 Cooper Street in 1886 opened more than three decades of occupancy by members of a prominent Camden retail family, William and Clara Fredericks and their daughter, Edna, born the same year they moved into the house. William Fredericks, born in Camden in 1854, managed the hardware store that his father, Harry, had founded in the 1850s. The store carried the goods that helped to build the growing city – window sashes, doors, and building supplies. While the business prospered, the elder Fredericks also organized the Camden Merritts baseball team, which lasted just a year (1883) but started the career of pitcher William (Kid) Gleason, who later played for the Baltimore Orioles, the Detroit Tigers, and Philadelphia Nationals.

When the Fredericks family moved into 423 Cooper Street, the Camden Daily Telegram noted that their “handsome new residence” was being “fitted up in an elegant manner.” The Fredericks family displayed other signs of affluence while living at this address, including the employment of domestic servants even though they remained a small family of three. When Edna Fredericks reached adulthood, at age 20 in 1906 she sailed with relatives to Europe for a summer tour. The family also spent summers at the Jersey Shore, favoring Atlantic City.

In 1916, approaching retirement from business, Fredericks put the house up for sale, advertising it as a “three-story brick house in one of the finest residential sections of Camden.” It offered “twelve rooms and handsome tiled bathroom; hardwood floors; pier and mantle mirrors; crystal chandelier; gas and coal ranges, cemented cellars; large yard and side entrance; front and side porches.” After a lifetime in Camden, in 1918 Fredericks retired and the family moved to an apartment in West Philadelphia.

The next long-term occupant of 423 Cooper Street reflected the transition of the thoroughfare to commercial uses during the 1920s. The transition, promoted by Camden real estate interests, included conversion of many former residences into offices or apartment buildings. The redevelopment activity accompanied construction of the Delaware River Bridge, later renamed the Benjamin Franklin Bridge, which opened in 1926.

Beginning in 1923, 423 Cooper Street became the residence and funeral home of Charles W. Hiskey, who was assisted in the business by his wife, Matilda. Previously on Sixth Street, the Hiskeys described their new location as a “modern funeral home.” Charles Hiskey developed an extensive network of acquaintances that could be expected to aid the business as he joined various lodges, the Masons, the Kiwanis Club, and other organizations. Matilda Hiskey was a lifelong member of the First Methodist Church. The funeral home remained in operation until 1961, when Charles Hiskey died, five years after his wife.

A real estate firm next acquired the building and leased to office tenants, including physicians.  As an office building, 423 Cooper Street changed hands several times during the 1960s and 1970s, then became the property of Rutgers University in 1984. When surveyed for inclusion in the Cooper Street Historic District in 1985, the building was described as “a highly intact example of one of the most prevalent styles of architecture on Cooper Street” and “a significant contributor to the heritage of the streetscape.” The building was demolished in the early 1990s, creating a vacant lot that remained three decades later.

For a list of known residents of 423 Cooper Street, visit the Cooper Street Residents Database and scroll down to 423.