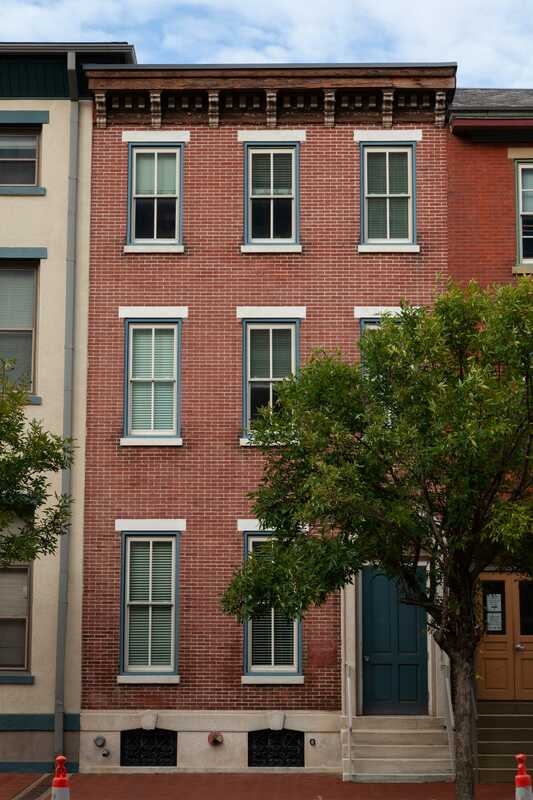 405 Cooper Street is a contributing structure of the Cooper Street Historic District, listed on the New Jersey and National Registers of Historic Places. The district's nomination for the National Register identifies significance in part for the presence of Camden’s “most intact examples of nineteenth-century houses” and their embodiment of “the street’s change from residential and professional to commercial.” The house at 405 Cooper Street embodies this change through its history as a single-family home that transitioned to medical offices and apartments during the 1920s as affluent families moved to suburban towns during the construction period for the Delaware River Bridge (later renamed the Benjamin Franklin Bridge). By the 1970s, Rutgers University acquired the building, which later became home to the Department of Sociology, Anthropology, and Criminal Justice.

Italianate with some Greek Revival elements.

As a new house rose at 405 Cooper Street in 1868, the West Jersey Press proclaimed it to be a sign that Camden improvements were keeping up with larger cities and matching the best in the country. The house, the newspaper reported, “is one of the handsomest residences in Camden. Planned with rare judgment, and built in the latest style of architecture, of excellent material, with large halls, ample parlor, sitting, dining rooms, and sleeping apartments supplied in every part with water, heat, and light.” Indeed, it was “the beau ideal of all that is neat, airy, and convenient.”

The lot at 405 had remained undeveloped during the 1840s and 1850s as much of the rest of the block filled with rowhouses. The property had been  subdivided from lands held by the Cooper family and changed hands three times, first conveyed from Esther Cooper to a Philadelphia clerk, Joseph Wayne (1848) and next to a Philadelphia deputy marshal, Samuel Halzell (1851), but there is no evidence that Wayne or Halzell relocated to Camden. Meanwhile, the grandest house on the block rose on two adjacent lots (401-03) in 1850. Its owner, lumber merchant George W. Carpenter, acquired the lot next door in 1854.

The house built in 1868 was intended to be the home of George W. Carpenter’s son Charles, a coal dealer who commissioned its construction while living across the street at 408 Cooper Street. Before he could move in, however, he died at the age of 34 from causes not publicly disclosed. His completed house was sold to his younger brother, George W. Carpenter Jr. In the deed, their father mandated that the cornice on the new house be raised to be even with his residence next door. This may explain the taller, heavier, more ornamental cornice that contrasts with other houses on the block built earlier. The restriction also could have forestalled the addition of a French-style mansard roof, which was becoming the fashion for newly built houses in Camden.

The year before he bought the house at 405 Cooper Street, George W. Carpenter Jr. had entered into a business partnership in Philadelphia, Hall & Carpenter, which sold metals and hardware. The business filled a five-story building at 709 Market Street, on Philadelphia’s dominant commercial corridor. In an age of cast-iron buildings and tin ceilings, Hall & Carpenter sold metals from Europe and the United States: “Tin-plate, pig tin, pig, lead, and antimony … Iron, cast and wrought, in whatever size desired, square and rolled; steel, of every grade; galvanized brass and copper, that will effectually resist the corrodings of time; and copper in sheets.” Like many of his neighbors, Carpenter commuted to his business on the ferries that crossed the Delaware River between Camden and Philadelphia.

With his business and home established, Carpenter married in 1870. His new wife, Sara (Sallie) Reinboth, was at most 18 years old at the time of the ceremony at Camden’s First Presbyterian Church and may have been as young as 15. Their household in the 1870 Census consisted of the couple and one domestic servant, 20-year-old Irish immigrant Maria Early. By 1880, the family grew to include two daughters, age 4 and 7, and one son, age 2.

The Carpenter family’s presence at 405 Cooper Street ended with George Carpenter Jr.’s untimely death from a lung hemorrhage in 1883, but his heirs retained the house as a rental property for the rest of the nineteenth century. They rented first to a physician, James Armstrong, and next to a young widow, Ella Hackett, who operated 405 Cooper Street as a boarding house from 1886 to 1888. In addition to providing a home for her daughter and a niece, Hackett advertised “elegantly furnished rooms” for “first-class parties,” attracting boarders who included a violin teacher and an employee of the Philadelphia Petroleum Exchange.

During the 1890s, the tenants at 405 Cooper Street reflected the increasing presence of medical professionals in the neighborhood following the opening of Cooper Hospital in 1885. A dentist, Elmer Bower, rented the house for his family and practice upon graduating from the University of Pennsylvania dental school in 1888. They stayed as long as the Carpenters owned the property – more than decade – and over the next thirty years lived in two other houses in the same block (417 and 419 Cooper Street). While at 405 Cooper Street, they shared the home at one point in 1895 with one of Camden’s first female physicians, Sophia Presley. She lived at various addresses on Cooper, Penn, and Linden Streets after graduating from the Woman’s Medical College of Pennsylvania in 1879. By 1895, she had broken a barrier by becoming the first female member of the Camden County Medical Society and was serving as its secretary.

The presence of medical professionals continued with the next long-term owner of 405 Cooper Street, Jane Boyer Mecray, who held title to the home she shared with her husband, physician Paul Mecray. They moved into the house as soon as they married in 1900 and in the next decade had two children, a daughter and a son. Domestic servants, usually Irish or other European immigrants, helped with the housework and freed Jane Mecray to participate in groups such as the local chapter of the Daughters of the American Revolution. The family vacationed in Cape May, where Dr. Mecray was born, and at other points at the Jersey Shore.

Transitions came to the Mecray family, and Camden, during the 1920s. Some changes were marks of achievement: their daughter, Helen, went away to Vassar College, and Paul Mecray advanced to chief of staff of Cooper Hospital. Other changes resulted from the nearby construction of the Delaware River Bridge (later renamed the Benjamin Franklin Bridge), which was completed in 1926. Jane Mecray’s mother, Alabama Boyer, came to live with the family on Cooper Street because her longtime home in the 500 block of Linden Street stood in the path of construction for the new bridge plaza. With expectations that the bridge would create a new era of business prosperity for Camden, one house after another in the 400 block of Cooper Street transitioned into office or apartment uses. The Mecray family joined this trend by relocating to a home in suburban Moorestown but keeping 405 Cooper Street as a rental property.

From the 1920s through the 1950s, Paul Mecray maintained his medical office at 405 Cooper Street while renting offices to other doctors and apartments to public school teachers. His son, Paul Jr., occupied both an apartment and office in the building after following in his father’s footsteps into the medical profession. The younger Mecray served in the Medical Corps in India during World War II and returned to direct emergency medical services for the chief of Civilian Defense for Camden.

Because of their perceived value as business locations, houses on Cooper Street were spared from the urban renewal project that created a campus for Rutgers University in the blocks between Cooper Street and the Benjamin Franklin Bridge. By the early 1970s, Rutgers acquired 405 Cooper Street and renovated it to create space for academic and administrative offices. A more extensive renovation occurred in 2004 when the university combined 405 and adjacent 407 Cooper Street into one facility with office spaces, seminar rooms, and a student computer lab. The combined properties, turning their backs to Cooper Street by providing access through a shared back porch, became home to the Rutgers-Camden Department of Sociology, Anthropology, and Criminal Justice.

For a list of known occupants of 405 Cooper Street, visit the Cooper Street Residents Database and scroll down to 405.