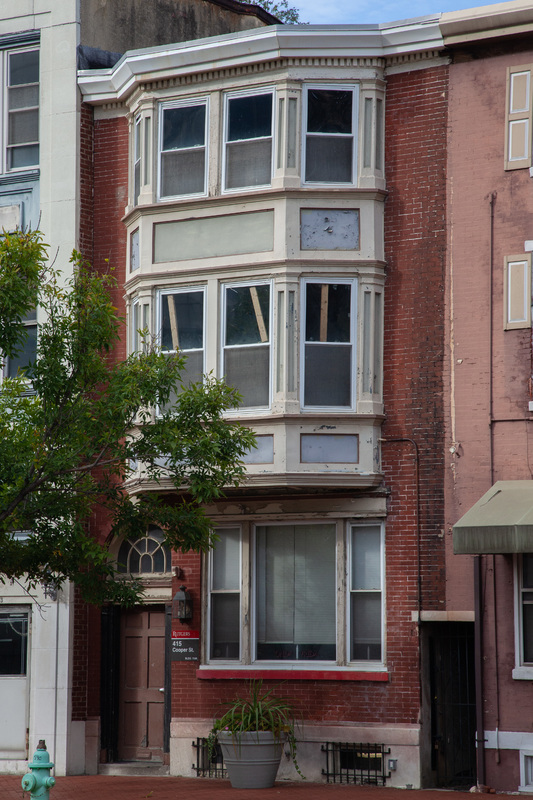 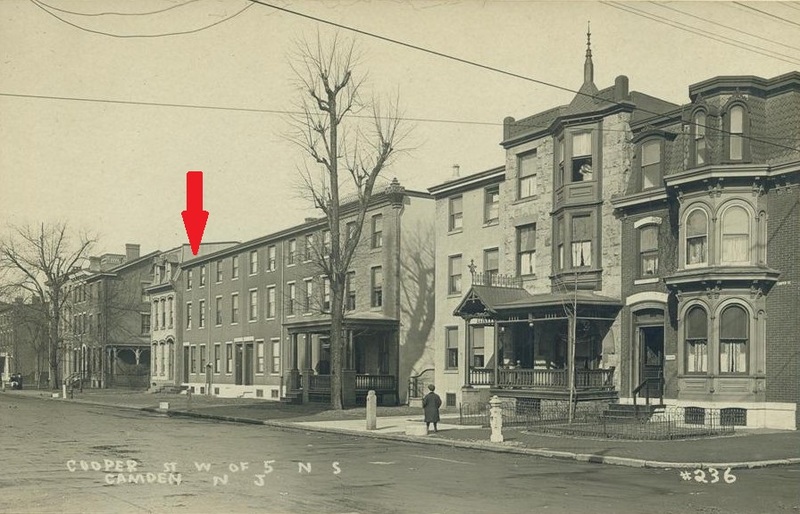 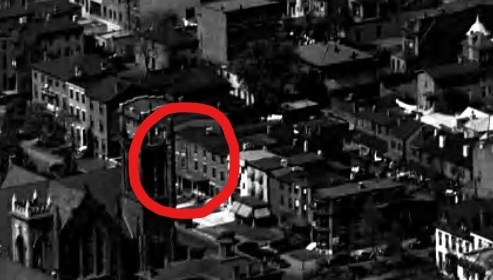 Originally a Greek Revival rowhouse, modified with Italianate influences and bay windows during the early twentieth century (prior to 1926).

In March 1853 the Philadelphia Public Ledger observed, "Mr. Atwood has nearly finished two exquisitely, ornamentally and conveniently arranged dwelling houses on Cooper Street. They are fine additions to the improvements of that part of the city." With this brief note, the newspaper documented the construction of 415 and 417 Cooper Street. "Mr. Atwood" was Jesse Atwood, a Philadelphia-based artist whose wife, Hannah, had purchased property on the north side of Cooper Street from the Cooper family in 1845. The frontage of the property accommodated three houses, initially a wood-frame house at 413 Cooper Street followed by the two brick houses erected in 1853. The Atwoods also developed four smaller dwellings on the back of the property, facing Lawrence Street.

For most of the century following their construction, the houses at 415 and 417 Cooper Street were jointly owned with one or both treated as investment properties rented out to others. Hannah Atwood derived a steady rental income as her husband pursued his career as an itinerant artist, and she bequeathed the houses to her granddaughter for the same purpose in 1883. The family sold the houses to others, but they remained rental properties.

Jerusha Browning, who headed the household at 415 Cooper Street by 1860, was a member by marriage of the prominent Browning family of South Jersey. Her husband, Lawrence, had 17 siblings born from his father's two marriages, which gave Jerusha a vast network of relations while she lived on Cooper Street for more than two decades after the death of her husband. By marriage or lineage, her relatives included the Doughtons and Hollinsheads next door (413 Cooper), the Hinchmans (417), and other Browning households across the street (414) and in the 500 and 600 blocks.

Jerusha apparently rented the three-story brick row house from its original owners, who relocated to Philadelphia but retained title until the 1880s. We cannot know why she made this choice, given that she and her son, Abraham, had inherited considerable property after her husband's death in 1858. If the $12,000 in inherited real estate lay in the South Jersey countryside, where the Brownings were extensive land holders, she may have opted for the proximity to neighbors or the potential to support the household by taking in boarders. In 1860, the residents at 415 Cooper Street included Jerusha, then age 60, Abraham, 26, another son, George, 22, daughter Margaret H., 30, and a servant, Margaret Welsh, 20.

During the 1860s and 1870s, various other Browning relatives lived with Jerusha's family for short periods of time. They also continued to employ servants, including Lydia Pernell, who was African American, in 1874. Over time, however, Jerusha and her daughter Margaret began to accept boarders in their home. This began in a genteel manner by 1876, when Jerusha was 76 and her daughter 46, and their boarders included the English-born architect Arthur Truscott and his two brothers in the insurance business, James and Millwood. They would have been low-risk boarders, given that they were nephews of an insurance man already established in Camden.

Of the three Truscott brothers, the architect remained with the Brownings the longest, for at least twelve years between 1876 and 1888. During this period, he established his architecture practice in Philadelphia and designed the New Jersey Safe Deposit & Trust Company building at Third and Market Streets in Camden (1887). Later he served as a supervising architect during construction of the Camden High School built on Park Boulevard 1916-18. His firm Baily and Truscott also contributed new buildings to Cooper Street with the Chateauesque trio of houses at 538-42 Cooper Street (c. 1892)--later retained as facades for the LEAP Academy Charter School--and the Colonial Revival house at 514 Cooper (1903).

After Jerusha Browning died in 1884, Margaret continued to operate the boarding house and to advertise it actively in Camden newspapers. She offered rooms for boarders on the second and third floor, in some cases connecting rooms that could be rented together. She remained in the home and in the boarding house business into her 70s. The Browning family association with 415 Cooper Street ended at the turn of the twentieth century, with Margaret H. Browning's death in 1901.

From Horses to Automobiles

The next long-term occupant of 415 Cooper Street, Joshua B. (for Benjamin) Franklin, purchased this house as well as the adjacent 417 Cooper Street in 1903. Franklin and his family lived in 415 Cooper while renting out the house next door. He improved the properties by adding wood front porches in 1913, in keeping with similar additions elsewhere on the block. He may have added the bay windows to the second and third floors, which are evident in an aerial photograph of Camden taken c. 1926 but not in a photograph of the block earlier in the twentieth century.

Franklin, born in 1861, moved from his family's farm in Burlington County to Camden during the city's fast-growing 1880s, when he was 21. He went to work for his uncle Joseph Franklin at the livery stable on Second Street between Cooper and Market and continued the business after his uncle's death. The Franklins became well known in Camden as they rented horses and carriages to the city's social and political elite. The business had a good location close to the Delaware River ferry crossings to Philadelphia and apparently yielded a good living, as Joshua Franklin purchased two other homes, at 224 Linden Street and 116 Cooper Street, before acquiring 415 and 417 Cooper. He joined fraternal organizations, including Lodge 15 of the Free and Accepted Masons.

When Franklin moved into 415 Cooper Street, his family consisted of his wife of 15 years, Mollie, and their 4-year-old daughter Edith. He was a notable enough in the community to cause his daughter's fifth birthday party to be reported in the Camden Courier Post. His personal fortunes soon took a tragic turn, however. Little Edith contracted typhoid fever and died in February 1907 at the age of 8, news that "came as a painful shock to various sections of the city where the family is well known," the Courier-Post lamented. By the end of the same year, Mollie Franklin also died, from the effects of a longstanding heart ailment. She was 38 years old.

In the wake of these personal tragedies Joshua Franklin remained at 415 Cooper Street, and his community connections may explain the prominent tenants he attracted to his investment property next door: the dentist Elmer Bower, for example, and the medical inspector for Camden schools, Henry Davis. In 1909, Joshua Franklin was married for a second time, to Chellie Smith, a widow who had been working as a saleswoman for several years since her husband's death. Joshua and Chellie continued to live at 415 Cooper Street for the next 25 years, at times renting rooms to others.

At the livery stable, Joshua Franklin suffered two serious injuries: in 1913, a severely broken arm that was treated by Dr. E.A.Y. Schellenger at Fifth and Cooper Streets, and in 1914 a near-electrocution that occurred during a Nor'easter when a live wire fell onto a telephone before Franklin picked up the receiver. The burns required treatment at Cooper Hospital.

The appearance of automobiles in Camden during the first two decades of the twentieth century brought change and eventually the end of Franklin's livery stable. As his customers preferred their new automobiles to carriages pulled by horses, Franklin's business dealt more often with commercial clients, such as the city newspapers who still used horses to pull their delivery trucks. Franklin himself entered the automobile business with partners between 1921 and 1923, but by then in his 60s he retired and closed the stables as well. He continued to live at 415 Cooper Street with his wife, Chellie, until he died at home in 1938. In reporting his death, the Camden Morning Post recounted how his 78 years of life had spanned the age of liverymen to the age of the automobile.

The sale of 415 Cooper Street from the Franklin family to Dr. Benjamin Gross in 1943 marked a transition of uses to rented offices and apartments. Gross, a proctologist who lived in Merchantville, based his practice at 425 Cooper Street for about ten years before relocating the office to Collingswood. Other office tenants through the second half of the twentieth century included an accountant, a lawyer, and a dental practice.

In the early twenty-first century, 415 Cooper Street gained new life as a restaurant location, at first operated by Rutgers-Camden graduate Elizabeth Ashley, then living in Cinnaminson. In addition to opening Lizzie's Cooper Street Cafe in 2003, she bought and renovated 417 Cooper Street next door to offer rental apartments to Rutgers-Camden students. Two other restaurants subsequently operated at 415 Cooper Street: McCargo's Restaurant (2006), a project of Camden native Aaron McCargo Jr., later a winner of Next Food Network Star,  and another cafe (2007) operated by Ramona Breggeta.

Note on sources: Historic structures surveys identify this house as constructed c. 1846, consistent with the deed for purchase for the land. This research updates and corrects the date of construction for the home.